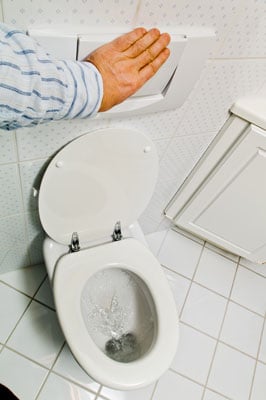 The toilet bowl is probably the most difficult place in the bathroom to keep clean. Rust stains in the toilet bowl are particularly annoying. Fortunately, removing rust is an easy process. You can restore the toilet bowl so it looks almost clean enough to eat out of it.

What Causes Rust Stains in the Toilet Bowl?

Rust stains often appear in a reddish-brown color. They arise due to the presence of iron in hard water. The rust may also appear on other fixtures, such as sinks, bath tubs, and heaters. The air combines with the iron, causing oxidization.

The key to rust removal is removing the iron. Many homeowners attempt to remove the rust by scrubbing the surface with bleach. While this seems like an easy DIY fix, the bleach actually causes a chemical reaction with the iron. This hastens the onset of more unsightly rust.

Multiple methods are available for removing rust the natural way. Start by opening all windows and turning on fans for ventilation. Proceed by concocting your own homemade rust remover. Feel free to use any of the following solutions:

END_OF_DOCUMENT_TOKEN_TO_BE_REPLACED 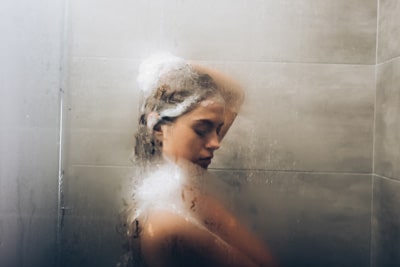 Do you follow certain rituals during your showers? Many homeowners engage in bad shower habits without even realizing it. Some of these habits are bad for your health, while others gradually wreak havoc on your plumbing. As plumbers, the latter especially worries us.

Who doesn’t love hot showers? We love them, too, but the constant supply of hot water is a strain on your heater. Aside from premature furnace wear, too much hot water also causes wrinkly skin. We recommend sticking to mildly warm water and limiting showers to a maximum of 10 minutes.

2. Not Using a Shower Cap

You should don a shower cap if not washing your hair. Most people don’t realize that hair does fall from the scalp during showers. Even if you have a mesh covering over the drain, some of the hair can still slip through. A single strand here and there may not seem like a big deal. However, the accumulation over several years can eventually lead to a backup. END_OF_DOCUMENT_TOKEN_TO_BE_REPLACED Some people have a habit of placing their wedding ring or other jewelry on the soap dish while conducting personal hygiene. A minor slip of a finger can cause that invaluable item to fall into the drain. Fear not; you can retrieve jewelry from the drain using simple household items. You do not need to employ any sophisticated MacGyver-like tactics.

Use a Coat Hanger

You may have seen people do this on TV. To the surprise of many, this method actually works to some extent. You may not be able to fetch smaller items like an earring, but you might be able to retrieve a necklace or larger piece of jewelry. Remove the drain catch and bend a metal hanger into an elongated rod with a hook on the end.

You can also try a wet/dry shop vacuum. Place the hose into the drain if it can fit into the hole. Hopefully, it will have enough suction power to suck your jewelry up. Place a pantyhose over the hose so you don’t suck the jewelry into the vacuum bag. END_OF_DOCUMENT_TOKEN_TO_BE_REPLACED Do you have a canine or feline among the household? Unbeknownst to some homeowners, pets may affect the plumbing, and vice versa. We’ll outline a few pet owner plumbing tips and what you can do to prevent pet-induced plumbing issues.

Never Leave the Toilet Seat Up—Does your dog enjoy the occasional sip of water from the toilet bowl? This isn’t a major concern since the water itself isn’t particularly harmful. However, the water and bowl may contain residue from chemical cleaners that pose a health concern if ingested.

Never Flush Kitty Litter—Some cat litter brands are marketed as flushable. Even so, we don’t recommend flushing the contents down the toilet. Your cat may consume foods that are not fully digestible, such as bones. You don’t want this matter ending up in the toilet drain. END_OF_DOCUMENT_TOKEN_TO_BE_REPLACED Did a pipe just burst in the home? Is the bathroom or basement floor flooded? The severity of damage depends largely on the type of wastewater. The filthier the water, the greater the damage and remediation. Regardless of the types of wastewater you encounter, you’ll need to bring in a plumbing service.

The Three Types of Wastewater

As you can probably guess, clean water is, well, clean. This doesn’t mean, though, that it’s clean enough for drinking. Clean water is simply free of contaminants. Rain and snow are examples of clean water. Even toilet tank water counts as clean. You can clean a minor flood yourself if dealing with a leaky toilet or heater. You must do so immediately, though, because clean water can turn into greywater within 48 hours. END_OF_DOCUMENT_TOKEN_TO_BE_REPLACED Flushing a tampon down the toilet is one of those things people do even though they know they’re not supposed to. This is why we decided to dedicate an entire post to this. This just might prevent an emergency plumbing call down the line for a few homeowners.

Why Flushing a Tampon Down the Toilet Is Bad

Most people know not to flush anything manmade other than toilet paper. What makes flushing a tampon especially bad? Tampons are bad for two reasons: they are not biodegradable, and they can swell to 10 times their size when they’re soaked. This makes them a common cause of toilet backups. We can’t tell you the number of times we have found tampons in the drainage when clearing a clog.

If you’re still tempted to flush used tampons out of habit, then consider this warning from Tampax: According to the popular tampon maker, users should never flush the tampons, the applicator, or wrapper down the toilet. END_OF_DOCUMENT_TOKEN_TO_BE_REPLACED With the year coming to an end, we figured we would talk about a fun “what if” topic. Consider this: what would be the ramifications if every Seattle toilet were flushed at the same time? Would nothing happen? Would residential plumbing clog up? Would the world come to an end?

Flushing Every Toilet at the Same Time: Any Consequences?

Roughly 290,000 installed toilets exist in the city of Seattle. That includes every residential toilet and all the stalls in public facilities. The average toilet uses 3.5 gallons of water per flush. If people flushed every one of those at once, that would be 1,015,000 gallons of water running through the municipal sewer system at the same time. Could the pipes withstand the sudden surge? END_OF_DOCUMENT_TOKEN_TO_BE_REPLACED

Aside from hearty food, Thanksgiving is about being thankful for all the good fortunes that people normally take for granted. As a plumbing service, we encourage homeowners to be grateful for their indoor plumbing.

Why Be Grateful for Indoor Plumbing?

Disease would be rampant if not for the wonders of indoor plumbing. In the Middle Ages, people simply discarded their human waste out in the open. This invited scores of disease-ridden pests and vermin. This contributed to the Black Plague that wiped away a third of Europe’s population.

In Victorian-era London, residents commonly threw human waste into the Thames River, which was also the city’s drinking water. This resulted in a cholera outbreak in 1854 where more than 500 people succumbed to the disease within the span of a week.

Some parts of the world today, such as rural India, still lack sanitation. An estimated 780 million Indians do not have access to a running toilet. Open defecation is commonplace. India also has an abnormally high rate of polio infection. This disease spreads through contact with human feces.

Other diseases attributed to poor plumbing include dysentery, typhoid fever, and hepatitis A.

The aforementioned diseases are extremely rare in modern developed nations. This is due to the intricate plumbing system that prevents human exposure to fecal matter. People are also living longer today. While this is the result of advances in medicine and dedicated doctors, indoor plumbing also plays a relevant role in human longevity.

Give Thanks for Your House Plumbing

Everyday amenities like running water and home heating are all conveniences to give thanks for. Plumbing & Heating Specialist is thankful for its customers, which is why we have special offers for the good residents of Snohomish. Before you pass the dinner rolls, remember to give thanks for your indoor plumbing. Plumber’s putty is like the Play-Doh you played with as a kid. It’s also a wonder item for DIYers. Indeed, the putty can temporarily fix a lot of problems. The keyword here is “temporary.” We’ll outline where and how you can fix common plumbing issues using plumber’s putty.

What Is Plumber’s Putty?

Plumber’s putty is a clay-like substance that plumbers and homeowners use as a quick-fix for sealing a leaky pipe. The putty is made mostly from clay with additional additives, such as fish oil, limestone, talc, and linseed oil. While the substance is non-toxic, please do not give it to a child as a toy.

Have a leaky pipe? Use the putty for a watertight seal. This isn’t a foolproof solution, however, as the putty may be ineffective against high-pressure leaks.

Use putty to create a seal around the edges of a sink for a watertight barrier. Be careful, however, not to apply putty too close to countertops. Some putties contain additives that may lead to staining. END_OF_DOCUMENT_TOKEN_TO_BE_REPLACED Water heaters tend to operate quietly in the background. At times, though, you may hear a loud banging, popping, or knocking sound. Is this just the appliance settling, or is this a symptom of a more serious problem? We’ll discuss the implications of a noisy water heater and what homeowners should do.

What Causes a Noisy Water Heater?

Hardwater is the most common culprit. The water may contain calcium, magnesium, or other mineral deposits, which sink and collect at the bottom of the tank. Steam bubbles that rise up inside the tank burst as they make their way through the sediment. This creates the popping and crackling noise you may hear from time to time.

A Cause for Concern?

The occasional popping sound is no cause for alarm, at least not yet. The water heater isn’t going to drop dead. However, you should contact a plumbing service at your earliest convenience.

A water heater that has to work harder may also overheat and wear away the tank’s protective lining, causing it to rust. This is why it’s important to bring in a technician to flush the heater.

Ended up not needing any work done but they came out and inspected my home for free and explained the issues we were seeing and how to prevent them from returning in the future. Very kind and honest men. I would definitely recommend them and call them for any plumbing work I may need in the future.

Friendly and professional. We called 3 other plumbers in our area, and only one called us back. Darrell and Thomas came out to fix our bathroom DIY remodel. Darrell was willing to even help give advice for other projects we have going. Will definitely use them again.

Thomas came out the same day and got my tub faucet to turn off. What a relief.